Bitcoin experiment at Sun-Times sets $.25 as “benchmark” for what a piece of newspaper content is worth to people 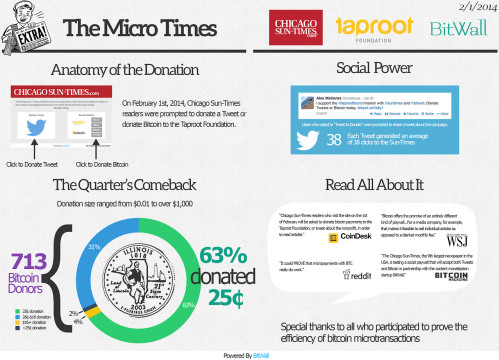 The Chicago Sun-Times, the ninth-largest newspaper in the U.S, launched an interesting, somewhat gimmicky experiment: For one day, the newspaper let Web visitors pay for content with bitcoin, the digital currency that everyone’s talking about but no one quite understands.

…According to numbers from Bitwall, the company that ran the Sun-Times bitcoin paywall, the experiment attracted 713 bitcoin donors, who shelled out as little as $0.01 and as much as $1,000 in some cases. Most people — 63 percent — gave 25 cents, a number that Bitwall CEO Nic Meliones said is a good benchmark for where publishers can expect down the line.